Our team wants to show you couples that are so in love that they don’t give a damn what others think. We’ll start with the world’s shortest married couple, Paulo Gabriel da Silva Barros and Katyucia Lie Hoshino, who are only 181.41 cm tall (71.42 in). After their wedding, the pair became Guinness World Records holders. However, because of their height, both Paulo and Katyucia attract public attention while they are together, giving them an advantage in coping with it. “We may be short, but we have enormous hearts and tonnes of love for each other and everyone in our life,” the couple explains. Anton Kraft is a bodybuilder who stands just 4 feet 4 inches tall (132 centimeters). This did not prevent him from advancing in his job. He is the world’s only individual who can lift four of his own weights. Anton, on the other hand, considers his marriage to China Bell, a transsexual lady who stands 190.5 centimetres tall, to be his greatest success. Despite their differences, Anton and China have a deep understanding and feeling for one another, which makes their relationship fantastic. Sean Stephenson and Mindie Kniss, both motivational speakers, met through a mutual friend and married in 2012. Sean is a fantastic example of how to maximise your potential no matter what. Sean was born with a bone condition, and by the age of 18, he had shattered 200 bones in various places of his body. Mindie says she is very satisfied in her marriage, despite the fact that online bullies targeted their sexual lives. The next couple on our list is also the world’s most modified married couple, according to Guinness World Records. Victor and Gabriela Peralta have tattoos covering the bulk of their body. The couple also has roughly 80 body changes, including 50 piercings, implants, and other items. Victor and Gabriela have been married for 20 years and believe they are “ideal” for each other, regardless of what others say. Nick Vujicic is a living legend and a loving spouse despite being born without arms and legs. Kanae Miyahara, his wife, is a true inspiration! Nick was born without legs and arms for no medical reason, but he has battled psychologically and physically from childhood. It did not, however, become a barrier to love at first sight. Kanae recognised Nick as “a handsome and remarkable man with a great pull to him” when she first met him. Now that the couple has four children, they offer as a magnificent example of unconditional love. 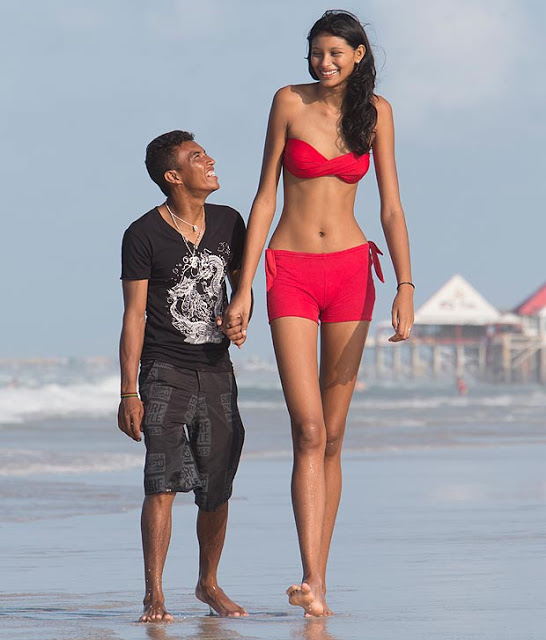 Elisane Silva is Brazil’s tallest woman, standing at six feet eight inches. A benign tumour generated an overproduction of her growth hormone, a condition known as “gigantism,” which is why she is so tall. Her height, on the other hand, hasn’t stopped her from finding love. Francinaldo Da Silva Carvalho, the model’s husband, is only five feet four inches tall. What’s more significant is that her husband treats her as if she were a normal person and doesn’t notice her height. The couple recently welcomed their first kid, and we are overjoyed for them!