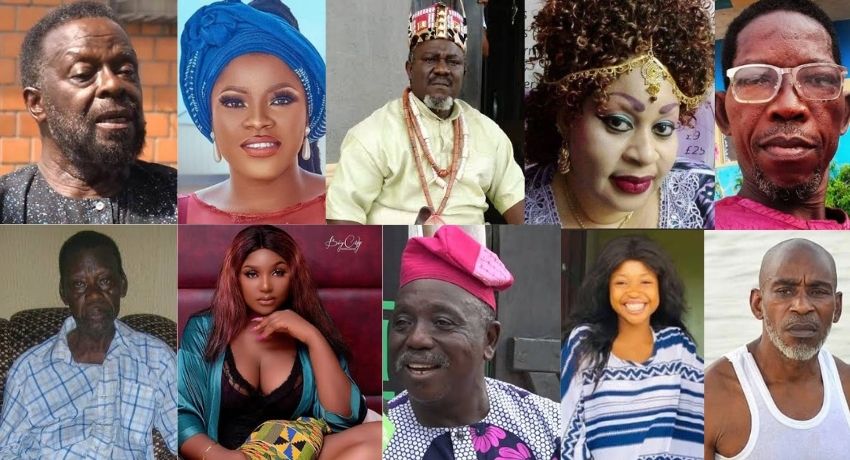 Death they say is inevitable. Nollywood has sorrowfully said goodbye to several beloved public figures and influential icons of culture in just five months into the year 2022.

While some passed away due to illness, others died mysteriously, throwing the make-believe industry into deep shock. Here are ten Nollywood actors and actresses who have passed on this year.

Just as we were being ushered into the second month of the year, news of veteran actor, Adewuni Adewoye popularly known as Tafa Oloyede broke the internet. He died on February 1 at the age of 69. Oloyede who began acting in 1974 under the tutelage of Oyin Adejobi is best known for featuring in movies such as Jaiyesimi, Ayanmo, Ekuro Oloja, Orogun, Akanji Oniposi. He would have been 70 this year.

In just a little over a week, while Nollywood was still mourning, another veteran actor, Romanus Amuta, popularly known as Natty in the rested NTA comedy series New Masquerade died on February 9 at the age of 79 after a protracted sickness.

New Masquerade, for which he was most popular, also starred the likes of Chika Okpala (Zebrudaya), Claude Eke (Jegede Sokoya), James Iroha (Giringori), Christy Essien-Igbokwe (Apena), David Ofor (Clarus) and Lizzy Ovoeme (Ovularia). The movie was one of the most popular Nigerian soaps of the 1980s.

On Monday, February 28, the last day of the month, veteran actor Lari Willams’ death was announced.

The movie star passed on at the age of 81, following a long illness. Williams, who was the first president of the Actors’ Guild of Nigeria, died at his home in Ikom, Cross River State.

He was also a poet and playwright who was active in theatrical productions.

Just when celebrities were preparing to pay their last respect to Lari Williams, news broke again that actress Shade Akin Taylor Aberuagba popularly known as Oluweri Magboojo had died. Shade was well known for her dramatic style of makeup, especially her curvy brows. She was the star of the movie Olúweri Màgbóòjò where she played the lead character.

Shade Taylor reportedly died on Monday, February 28th in the United Kingdom. The light-skinned actress was well-known for her appearances in movies produced by Gbenga Adewusi’s Bayowa Films International. She was 59 years old.

Veronica’s mysterious death happened just one week after she celebrated her birthday.

Veronica Mngohol Takor was also a 200 level Microbiology student of Benue State University (BSU), Markurdi. Her sister, Takor Sarah revealed that Veronica had featured in a movie titled  The Devil Must Blow and some other local Benue movies.

The death of Dejo came as a rude shock to Nigerians. Many didn’t believe the sad news, hoping it was an ‘April fool’ announcement, especially since he was spotted at an event just a few days before his death.

The comic actor, writer and producer appeared in movies like Hally The Drummer and Jide Jendo.

On the evening of Friday, April 29, fast-rising actress Chinedu Bernard slumped while cleaning the Chapel of St. Leo the Great Catholic Church in Enugu. The Priest, Rev Fr. Uchendu Chukwuma and some parishioners rushed the actress to East Side Hospital in Enugu where she was confirmed dead.

However, concerns were raised when photos of the deceased in a hospital bed with bruises on her face were posted on Instagram, causing the national president of the Actors Guild of Nigeria (AGN) Emeka Rollas to demand an autopsy to ascertain the real cause of Chinedu’s death.

Born on May 26, Bernard had featured in a number of movies including The Regret, Royal Bracelet, Onlocked, My Sister’s Man, Love Without Conscience, Just A Wish, Money Fever, Who Runs The City.

On the first day of the month, while the entertainment industry mourned Chinedu, it was dealt another blow as up-and-coming actress Francisca Choji’s death was announced.

Francisca’s body was found at Rayfield Resort hotel in Jos, Plateau State on May 1. Gabriel Ubah, the spokesperson of the Plateau state police who confirmed Choji’s demise said the fast-rising actress was found floating in the water at Rayfield Resort.

In the same week, on May 4, actor David Osagie, better known as Sir David, died after filming on set the previous day.

His death was announced by his colleague Ngozi Ezeh who noted that the actor was not sick.

Sir David was best known for his role as king. Some of his movies include My Sorrow My Pain, Agunna and Lost Battle.

Just a week after, Nollywood undid suffered yet another loss on Thursday, May 12 as veteran actor, Gbenga Richards was confirmed dead after battling an unknown ailment.

The once vibrant actor, who was a force to reckon with in the 1990s and early 2000s, according to reports suffered from a series of ailments and raising money for his treatment became difficult because he had fallen on hard times.

Richards’ first appearance as an actor was to represent Nigeria with Hubert Ogunde at the Second World Black and African Festival of African Culture (FESTAC) in 1977.

He also featured in blockbuster movies like Sango, Mirror in the Sun, Betrayal by Love, Fighting Machine and a host of others.