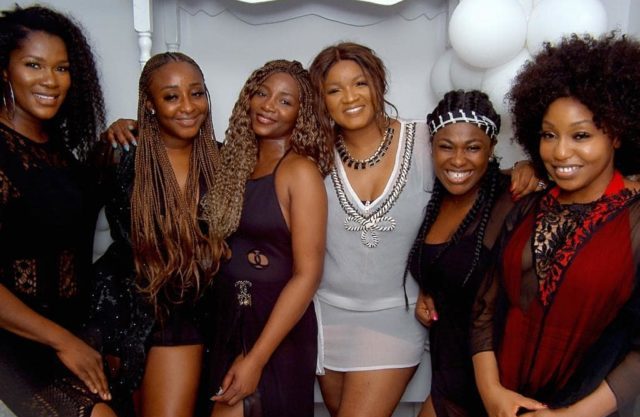 The Nigerian film industry which is popular as Nollywood has come a long way since it started in the 1990s even though it was until the 200s that the name of Nollywood was coined. The evolution of the industry has been thanks to many great actors and Nollywood actresses who have kept and continued to keep fans thrilled.

The Greatest Nollywood Actresses Of All Time

Joke Silva is arguably the greatest actress in Nollywood. Not only has she sustained in the industry for a very long time, she always delivers no matter the role you throw at her. More so, she has done everything from theatre to film and even TV. Together with her husband, Olu Jacobs, the pair are among the power couples of Nollywood.

Born on 29 September 1961, Silva started acting in the early 1990s although it was towards the end of the 1990s that she became famous. Also a director and businesswoman, she has appeared in more than a hundred films and TV shows have been in the industry for more than three decades.

City People Movie Lifetime Achievement Award, She has won many awards including the African Movie Awards, and the SOLIDRA Award among others. She is also a recipient of the Order of the Federal Republic (OFR) merit award from the Nigerian Federal government.

As far as Nollywood is concerned the only person that stands on the same stage as Joke Silva is Genevieve Nnaji. Considered by many to be the greatest of Nollywood actresses, Nnaji has neem in the movie business since she made her debut in 1987 when she was only 8 years old. Also a movie producer, director, and businesswoman, she became a household name in the country in the early 2000s.

Born on 3 May 1979, the University of Lagos graduate has appeared in more than 200 films many of which became great successes. After she was banned from the Nigerian movie scene in the 2000s, she tried her luck with music but that did not turn out well for her, forcing her to return to her first love.

Considered Nigeria’s Sharon Stone, the legendary actress was referred to as Africa’s Julia Roberts by Oprah Winfrey. She has appeared in films such as Ripples (1987), Most Wanted (1998), Road to Yesterday (2015), and Lionheart (2018). Her film, Lionheart was later bought by Netflix and it became the first Nigerian film to be bought by the streaming service. A recipient of the Order of the Federal Republic by the Nigerian government, she has won many awards including the Black Reel Awards, African Movie Academy Awards, Africa Magic Viewers Choice Awards, and Nigeria Entertainment Awards among many others.

Very close to Nnaji is Omotola Jalade Ekeinde who many consider being her archrival. A graduate of Obafemi Awolowo University, Omosexy, as she is often referred to as has been in the Nigerian film industry since 1995 when she appeared in Venom of Justice. The first African celebrity to reach a million likes on her Facebook Page, she has earned the respect and love of many in Nigeria and beyond thanks to her unwavering talent.

Omotola was born on 7 February 1978 in Lagos State, Nigeria. Since she made her debut as an actress, she has come to appear in close to 300 films making her one of the most featured faces in Nollywood. The actress has also ventured into music in 2005. She recorded a little success with her sing, Naija Lowa. She also got into the reality show scene in 2021 with her show, Omotola: The Real Me.

Among her most popular works are Mortal Inheritance (1997), Blood Sisters (2003), Ije: The Journey (2010), A Private Storm (2010), and Last Flight to Abuja (2012). Also a recipient of the Order of the Federal Republic, Omotola has won many awards in her acting career including the following: Africa Movie Academy Awards (AMAA), Ghana Movie Awards, Toronto International Nollywood Film Festival, and Golden Icons Academy Movie Awards.

The name of Rita Dominic is never new to anyone who has had the chance to follow Nollywood. The actress has emerged as one of the very best in Nollywood which is the reason why she has sustained for a very long time. The ageless star was born in 1975 and she started her career in 1998 when she was still in school.

Also a director and producer, Rita Dominic has won many awards including the following City Peoples Awards, Best of Nollywood Awards, Nigeria Entertainment Awards, and Golden Icons Academy Movie Awards among others.

Famous as Mama G, Patience Ozokwor is among the legends in the industry. She started her acting career in 1999 and because of her amazing talent, many have come to associate her personality to the roles of the wicked wife, mother-in-law, and woman that she has always acted.

Before she started acting on screen, Patience Ozokwor was into radio drama before she later joined the Nigerian Television Authority (NTA) TV show, Someone Cares. Some of the films she appeared in are Blood Sister (2003), Chief Daddy (2018), The Wedding Party 2: Destination Dubai (2017), Bad Comments (2020), and Billionaires Club (2003).